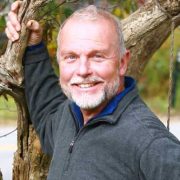 Island Heritage Trust is pleased to welcome David Vandiver as its new Stewardship Director. David and his family live in Penobscot, and his wife, Marianne, works at Island Family Medicine. He brings us a wealth of experience and a passion for land conservation. For fourteen years – sometimes part time and sometimes full time – David served For Love of Children (FLOC), an outdoor education facility in Harpers Ferry, West Virginia. At first working only in the summers, David says at the end of every summer he begged FLOC to stay for a few more days before he had to return to the city, reluctant as he was to leave the outdoor environment he loves. Eventually, they gave in and employed him year round.

FLOC occupies land which is part of a 1600-acre wilderness preserve owned and managed by the Rolling Ridge Foundation, a Virginia land trust which David also served. Realizing that this huge tract of land needed management, David made a proposal to the Foundation and was hired as its first conservation steward. For the next four years he worked to develop mapping, signage and a system for trail maintenance, which had previously been entirely lacking.

Explaining his devotion to the work of land trusts, David recalls a vivid childhood memory. He grew up in the White River Delta area of central Arkansas, where his grandfather, who supported himself by hunting and fishing, lived in a cabin in the midst of a large tract of privately owned land, fully wooded, susceptible to regular flooding, and adjacent to a large state owned wildlife refuge. When the land came up for sale, a group of citizens banded together to persuade the state to buy it and add it to the existing wildlife refuge. The state pleaded poverty, and the land was purchased by two brothers who planned to farm it. David’s grandfather warned them all about the flooding. But the Corps of Engineers planned to build a levee, despite his grandfathe’s warning that no levee could be sufficient to stem the flooding. Nonetheless, reassured by the Corps of Engineers, the brothers totally stripped the land, burning all the wood. The community, David recalls, never got over it. Every Sunday afternoon folks would gather and watch the burning woodland in horror and dismay.

Thirty odd years later the land came back up for sale. It turned out the brothers had never been able to farm the land profitably – principally because of the flooding about which David’s grandfather had warned them. With the timber long gone and after 25 years of fruitless plowing, some six feet of topsoil had been lost. The citizens regrouped. And this time, they were able to raise the money, together with support from the state, and purchase the land. They have begun replanting trees. But the consensus is that it will never be the same. The futile loss of luxuriant woodland is something that David has never forgotten.

Holding a master’s degree in divinity, David spent a number of years as part time Pastor at the Brooksville United Methodist Church. His theological background, combined with his childhood experience in the White River Delta and his subsequent work for FLOC and Rolling Ridge Foundation, have instilled in him, he says, a passion for land conservation. The earth, he believes, “comes to us as a gift that we can never repay. We must care for it as best as we can.”