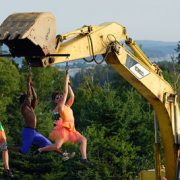 Where else can an excavator upstage a dance troupe? Only in the region’s most unique collaboration between a land trust, an arts organization, a quarry, and a machine artist.

Full of surprises, this year’s four, full-scale Quarryography dance performances wowed over 1600 enthusiasts at IHT’s Settlement Quarry against a backdrop of perfect Maine summer weather. That is not a misprint – the show averaged over 400 people a night around the quarry rim. 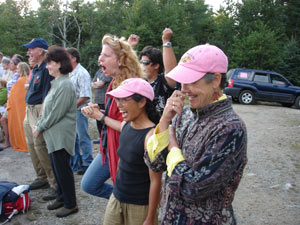 Choreographers Alison Chase and Mia Kanazawa masterfully wove together a bravura of puppetry, flying dancers, Caribbean music, and moments of pure joy and banditry that had the audience cheering and applauding far past an exquisite climax.

The machine artist in question is Rick Weed of Deer Isle and his Mark III, Belco Excavator. Weed’s incredible dexterity with a two-ton leviathan has been honed with Championships scored at Backhoe Rodeos over the last decade. Competitors must excel at events like Backhoe Bowling, Backhoe Basketball, and Egg in the Nest. For the latter, the operator must pick up an egg from a sand pile and gently place it into a straw “nest” inside a tire. It is exactly this virtuosity that provided the possibilities for the production. Weed’s finesse gave dancers the confidence to crawl inside a bouncing bucket, drape their bodies over his machine, hang from wrist straps 40 feet above the quarry surface, and lie still as steel teeth slid toward them. 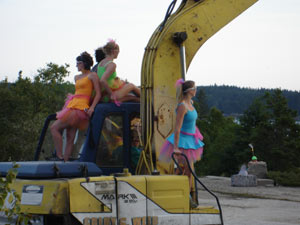 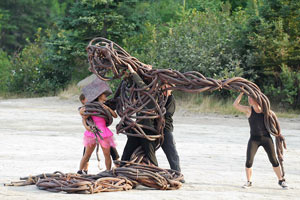 She swoops onto the stage in a pink dress and gray “granite” hat. Fungsang and Cable Man commune with Spruce Trees and Milkweeds as they enjoy a full courtship capped by a hug six feet off the ground. Weed returns with delightful Hot Pink Granite dancers (Breanna Gribble, Emily Kent, Rebecca Anderson Darling, Wendee Rogerson, Twanda Chabikwa, Jessica Bindig) riding the Belco like a yellow elephant. In Madonna shades and fluorescent outfits, the dancers – guest artists from around the country and world – provide a lithe counterpoint to the gritty granite-scape. They swing in unison or in couplets and rise briefly before alighting to rhumba and swing dance around the stage. 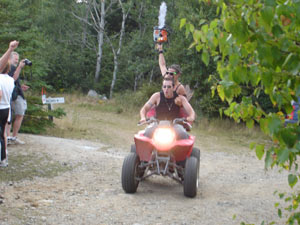 Just as Cableman and his Sprite settle into a prone reverie, a chainsaw sounds from the cliffs and in roars Bad Seed Jason Weed on his four-wheeler with fellow hombre Mary Barnes (wielding a chainsaw with a faux blade). While Weed does “donuts” in a blaze of gravel and menaces the crowd, Barnes proceeds to terrorize and beat up Cable Man and his assistants while Sprite makes a get-away. With her black tutu and bad attitude, Barnes is the Anti-Dancer. She and Weed make a triumphal and noisy exit to a cascade of jeers and boos from the crowd.

When the Dancing Excavator returns with the Dance Corps and the Sprite, they reanimate Cable Man and an extravaganza of dancing begins anew. When the Bad Seeds return amid a flurry of beer cans, Cable Man and his supporters knock them down with help from Milkweeds now wielding chunks of “granite.” Kent soars 30 feet above the stage at the apogee of the Excavator’s reach. Chabikwra lifts Hot Pink dancers and contorts himself from the flying bucket. A beribboned Cable Man swings in a full arc as the centrifuge of a crescendo of sound and movement in the finale.

I cannot say enough about the band. Chase does a great job with a young, savvy, snail-helmeted ensemble. Their Calypso-inspired, Zydeco-infused sound delivers a landscape of sweetness that sets the tone and provides the musical foil for the entire production. This tiny band emits a grinding, lilting, booming repertoire that creates a remarkable ambience.

Although it appears Alison and Mia are taking a break next year, we look forward to many more of their creations in the Quarry’s amphitheatre. 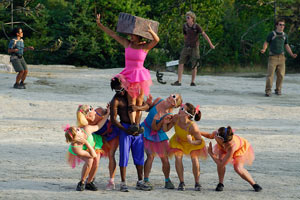 None of Quarryography would be have been possible without the dedication of many hard-working volunteers and staff from IHT and the Opera House.