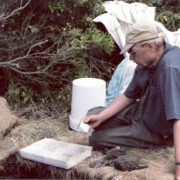 Holding artifacts that not seen the light of day for over 2,000 years, a group of amateur and professional archaeologists unearthed ancient materials from a shell midden illustrating life in the Early Archaic and Ceramic periods of Deer Isle’s paleo-Indian ancestors at Scott’s Landing this summer.

Blessed with good weather, over 20 amateur archaeologists and islanders dug and meticulously screened a small patch of the island’s newest preserve in late June and early July. After a lecture and welcoming meal at Ann and Roger Hooke’s the night before, Cox led his own archaeological team and the community participants through an enthralling but exhausting sun- up to sun-down field school on the shores of Eggemoggin Reach.

Cox’s team has worked with him on many other digs so they were paired up with community members to learn proper archaeological field techniques and how to recognize materials such as stone tools, pottery, food remains, and cultural features such as hearths and tent floors. Cox and others taught the more inexperienced participants how to record and interpret results and protect fragile artifacts for future study. 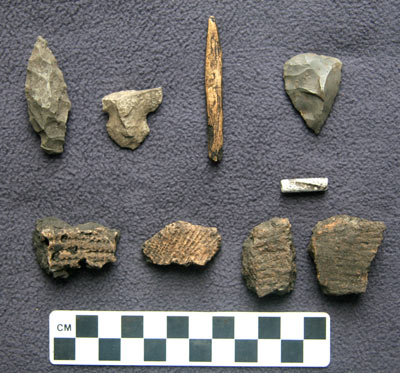 From the photo of the materials, one can see how crucial it is when excavating a site that everything be carefully removed from a site and its location recorded with precision.

Many community members remarked on the effort expended and time needed to protect the detailed history and important information that is available in a professionally supervised dig. 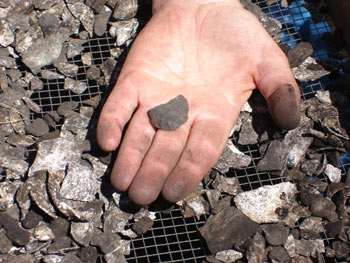 IHT President and anthropologist Bill Haviland says in his book, Deer Isle’s Original People, that “Once taken out of context, objects by themselves tell us next to nothing. Thus to dig around in archaeological sites looking for relics destroys them and the information they contain as effectively as if they were bulldozed into oblivion.”

He goes to say that Paleo-indian sites are generally “very small briefly but repeatedly by small groups of people – perhaps 1 or 2 families together.”
Often the sites were used for seasonal camping, fishing and harvesting for a highly mobile people who worked closely in clans and small units.
Steve Cox will be providing an in-depth public lecture about the findings of the Scotts Landing sometime in the fall of 2007.

Many thanks to Ken and Marnie Reed Crowell for their key role in creating this great opportunity for Deer Isle and the IHT and to the Bar Harbor Bank and Trust and the Island Education Foundation and other donors who underwrote the cost of the field school. 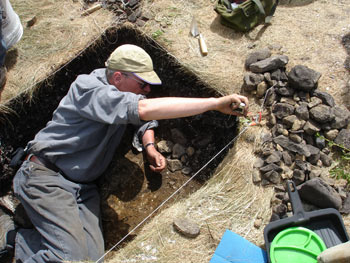