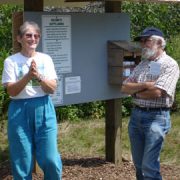 A large crowd turned out for the Scott’s Landing Grand Opening August 5 three years after the campaign began to purchase one of the last unspoiled shore land parcels on Deer Isle. Ciona Ulbrich of Maine Coast Heritage Trust and IHT President Bill Haviland untied the symbolic ribbon with over 50 people in attendance including young and old, new and long-time islanders. The 22-acre parcel was sold by Nathan and Ellen Pitts to the MCHT in early 2006 after a collaborative campaign between the two organizations. MCHT then deeded the property to IHT. In anticipation of long term stewardship costs, MCHT, the statewide land conservation organization, sold a two-acre parcel to fund endowment and ongoing stewardship costs. Teamed up with the four-acre parcel purchased separately by IHT in 2004, the Preserve now encompasses 24 acres of shoreline, beaches, nature trails, historic sites, and wildlife habitat.

IHT published a Scott’s Landing brochure and a Scott’s Landing History brochure that are available at the brand-new kiosk at the Preserve entrance opposite Causeway Beach. The kiosk was designed by Don Reiman and constructed by Ann and Roger Hooke, Joe Dorr, Jim White, Steve Whitney, and Steve Rowan.

Hundreds of donors and supporters contributed almost a million dollars to purchase the land with an anonymous donor closing the gap at the last minute through MCHT to complete the sale.

The Preserve is open to the public during day time hours for picnicking, trail hiking, and swimming. There are unusual plants that are listed on the back of the kiosk. Sandy and rocky beaches offer visitors a chance to explore the shore. The trails are marked with signs showing the location of the original ferry boat buildings and the Scott family barn and other historic features.

There was an archaeological dig in June directed by archaeologist Steve Cox with a team of amateur archaeologists and community members who signed up to participate in the five day dig. He and IHT President and anthropologist Bill Haviland will present a Talk on the findings in the fall. Check the web site and newspapers for date and time. 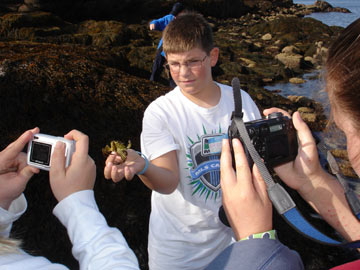